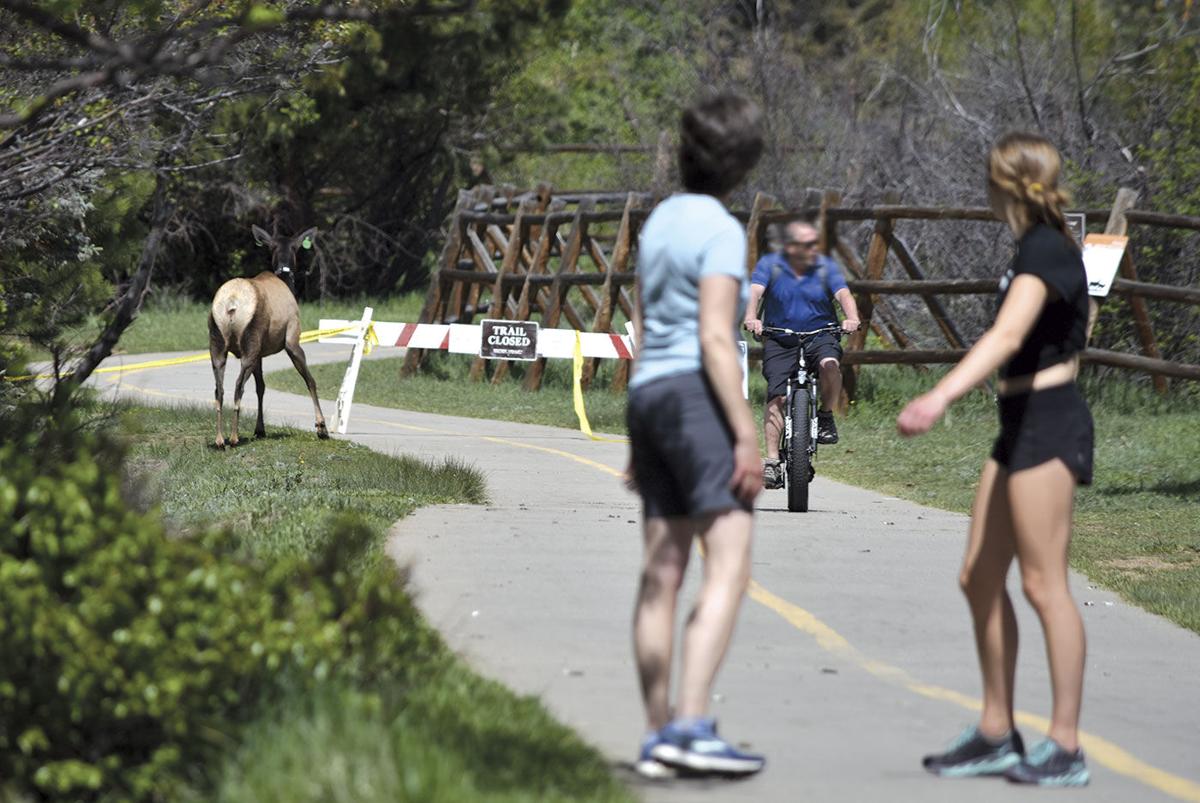 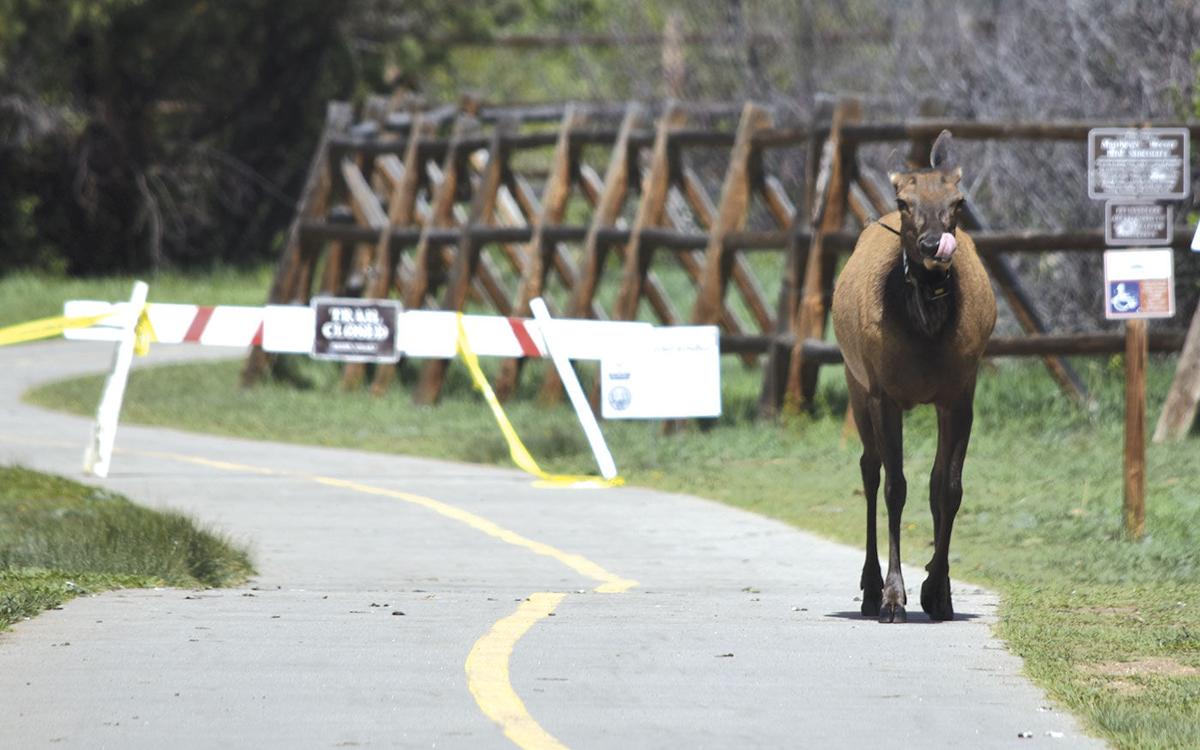 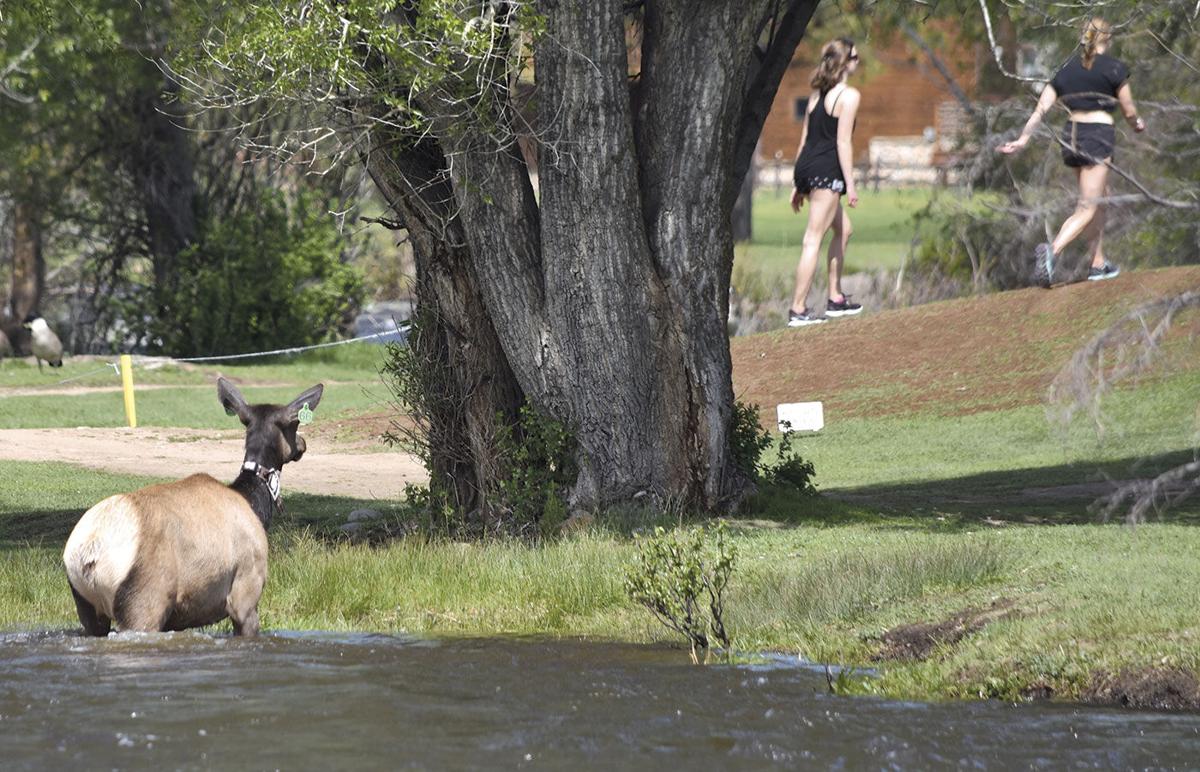 We are sharing because this hasn't happened to us before. There is no one more cautious and careful around calving season than me (and Gary!) We avoid known calving areas in the spring/early summer because to me, nothing is more scary than a protective mama elk! I am always very aware of our surroundings, making sure we're safe and that there are no elk in the areas we walk. That being said, we got chased by a protective mama elk on the Lake Trail last Monday, despite being more than 50 yards away from the bird sanctuary barriers and this mama elk! We were just trying to get a photo (with a LONG telephoto lens, by the way) of this barrier, blocking off the bird sanctuary. Did I say we were 50 yards away from this barrier??!!! We didn't see any elk until this bike rider came through the prohibited area, prompting the mama elk to confront the man and attempt to charge him. There were also three women, way in front of us, also watching the situation. The biker made it through and the three women who just wanted to end their walk by getting to the parking garage, wisely decided to turn and go a different way. We were still 50+ yards away, about to leave when the elk mama set her sights on us...so far away! She put her ears back, began licking her lips and....charge! She came running full tilt towards us and a friend who we ran into on the trail! The three of us turned and ran, certain that the elk would see we were getting even further away and stop, but no! She kept running at us! Gary kept looking back at her, saying, "She's still running after us....she's still running after us!......" We ran and ran as fast as we could... and I pulled a hamstring running that fast from a standing still position.

The elk then spotted the three women that had been in front of us, now traveling through the golf course on the other side of the river, trying to get back to their car near the garage. The elk jumped into the river, swam across and went after them! She got out of the water, honed in on them and began chasing them too, on the golf course! Luckily, the golf course ranger got between the women and the mama elk and she ended her chase..for then.

This just goes to show you that even though you could be very far away in what you think may be a safe space, an extremely protective new mama elk might just decide to charge you, even from far away.

Be careful out there everyone, I'll be icing my hamstring.

Laurie Andrews Krushenisky passed away in Estes Park on April …