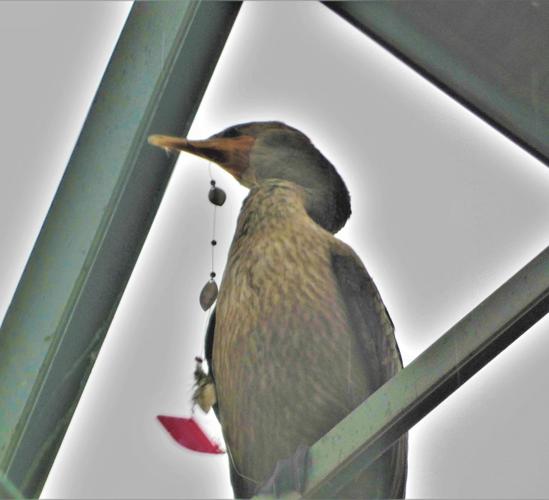 A double-crested cormorant perched on one of the power line transmission towers at Lake Estes with fishing line and tackle hooked in its beak. 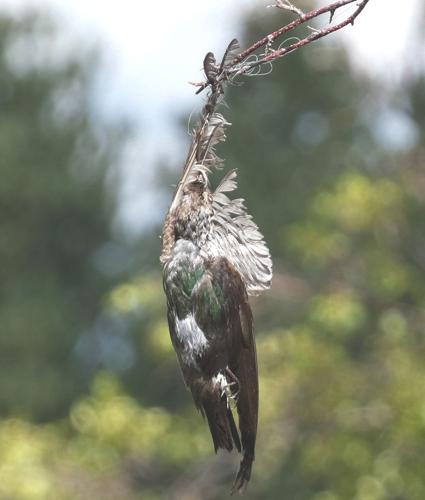 A violet-green tree swallow that died after becoming entangled in fishing line left in a bush overhanging the Big Thompson at Fisherman’s Nook at Lake Estes.

A double-crested cormorant perched on one of the power line transmission towers at Lake Estes with fishing line and tackle hooked in its beak.

A violet-green tree swallow that died after becoming entangled in fishing line left in a bush overhanging the Big Thompson at Fisherman’s Nook at Lake Estes.

Lake Estes has a growing problem, particularly around the Fisherman’s Nook area on the northwest end: discarded and abandoned fishing line and tackle are harming wildlife. Recently, a double-crested cormorant became entangled in fishing line in that area, swallowing multiple hooks and lead sinkers in the process. It was rescued, but ultimately had to be euthanized due to lead poisoning. Another cormorant, shown in the accompanying photo, was seen at the lake with fishing line and gear attached to a hook in its beak, but it evaded capture, and likely died as well. Mallards, Canada geese, passerines, ospreys, and even bald eagles have also been harmed by fishing line and tackle at the lake, and in the adjoining section of the Big Thompson River. Other animals are affected as well, including an elk that was spotted last season at the nearby golf course with a plastic bobber and line dangling from one of its antlers. Clearly, something needs to change.

As an avid angler myself, who grew up just down the canyon in Loveland, I’m not here to propose more fishing restrictions as a solution. But anglers need to recognize that if the situation at Lake Estes does not improve, then stricter regulations–or even outright fishing bans–are often the next step to avoid further harm to wildlife. Fortunately, improperly discarded fishing tackle is a fairly straightforward problem to combat. Here are five specific pointers on reducing your impact:

1) First and foremost, simply use the dedicated fishing line disposal tubes that are already in place at the lake. Line takes hundreds of years to break down naturally, so it’ll be a problem for a very long time if left to rot. Even if it means having to dig through a thorny bush, partially climb a tree, or wade across the stream in order to retrieve broken line, we all have an obligation to clean up after ourselves.

2) There is a trick to rigging your line so that the smallest section possible is left behind in the event that you snag an area you cannot reach. Remove your lure/fly/swivel, then attach a short section of thinner, lighter monofilament to the end of your line (a Surgeon’s Knot: tinyurl.com/2dxm75xd works well for this), then re-attach your lure/fly/swivel. This thin strip of line, known as “class tippet,” works like a fuse: it’s still strong enough to handle fighting fish, but will reliably break first when you’re pulling hard on a snag, ensuring that you don’t lose any of the line above it and leave behind a greater hazard.

3) When you are attempting to remove a snag, don’t wave the rod and jerk the line wildly, since that can cause your line to snap in a random spot. Instead, point the rod directly at the snag to prevent it from flexing, then slowly but steadily apply increasing pressure until the line snaps or the hook pulls free. If you are using braided line on a spinning rod, you may want to wrap your hands in your shirt first in order to avoid cuts.

4) If you’re very careful, you can sometimes retrieve a broken rig dangling from a tree branch by reaching out with your fishing pole and using the tip-top eyelet to grab the hook. Line caught in branches overhanging the water is particularly hazardous for songbirds and passerines, so do your best to remove those snags, even if they’re above your head.

5) Finally, switching from lead-based to tin-based sinkers can drastically reduce incidences of lead poisoning, particularly among sensitive bird populations that inhabit the lake during the summer months. Waterfowl that dive into the water to feed, such as cormorants and ducks, are especially vulnerable to lead poisoning since so many snagged lead sinkers are left strewn about the lake. Tin weights are admittedly a bit pricier, but a few cents more is small change compared to the cumulative cost of lead buildup in our waterways.

Please mark your calendars the for the Estes Valley Watershed Coalition’s second annual fishing fine and tackle cleanup on October 15, 2022, from 10:30 a.m. to 12:30 p.m. at Fisherman’s Nook on Lake Estes. For more information, visit www.evwatershed.org/events.

About the author: Evan Jones is a fly fishing guide and assistant editor of the Orvis Fly Fishing blog.

On August 31st, Kay Smith passed away with her partner of 28 y…