International student Laura Sandoval from Porta Rico prepares muffins, and other goodies for the staff and guests. She is part of the summer intern program that is a vital segment of the YMCA of the Rockies to further train and help students from foreign countries. 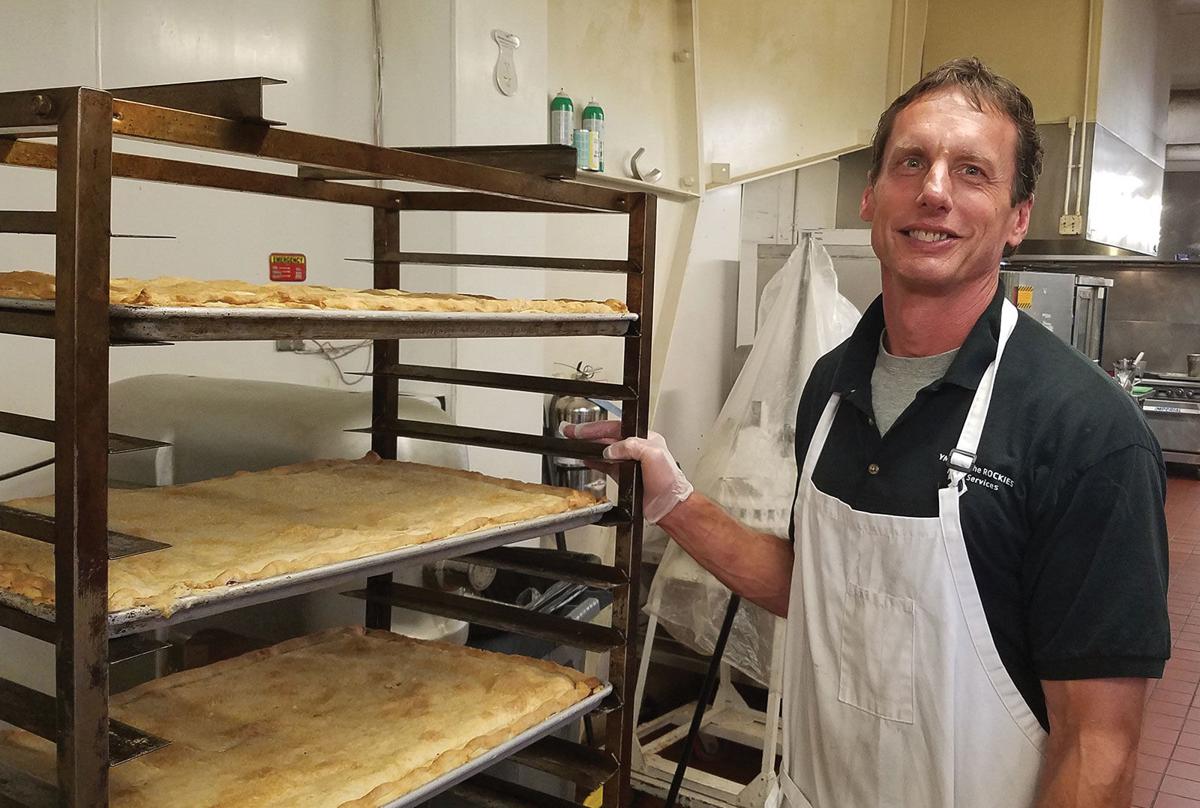 Mark Kozlowski - doing what he does best when at work, making, baking and sharing the delights of the Y bakery.

International student Laura Sandoval from Porta Rico prepares muffins, and other goodies for the staff and guests. She is part of the summer intern program that is a vital segment of the YMCA of the Rockies to further train and help students from foreign countries.

Mark Kozlowski - doing what he does best when at work, making, baking and sharing the delights of the Y bakery.

For Mark Kozlowski, baking is more than just a job or profession, it has been a mission for many years. “Mark the Baker”, as he is known at Estes Park Center YMCA has baked more cookies, brownies, loaves of bread, rolls than could be counted.

Mark had worked with the YMCA in other capacities before he started in the bakery with, who else but Baker Bill back in 1999. Some of his jobs at the Y been working in Housekeeping and the trash truck. He also worked in the Program Department in what was called the Golf Shack and at the Roller Rink.

His career path to the YMCA started on an island in Hawaii where he completed his college degree at the University of Hawaii in 1985. He was offered a job using his education, but fate would have it, he wanted the summer off and came to Cripple Creek Colorado, heard about the YMCA, and history was created. Mark never worked in an island paradise but has dedicated his life to a paradise called Estes Park, Colorado.

He married Melanie in 1995 while in Bellingham, Washington while she was in school completing her degree. “This is the life we carved out for ourselves, and I wouldn’t change it.” States Melanie as she sits in the Estes Valley Library where she works in the children’s section. “Mark will cook but he doesn’t bake at home.” Asked what Mark likes to bake the best her answer is “bread.” Each week, in the summer mark bakes a special loaf of bread for the outdoor vesper and communion service. You can see the committed honor in the way the bread is readied for the Wednesday evening service.

A few years ago, Mark was walking from the kitchen to the Rustic Café to deliver homemade, freshly baked cookies that would be for sale. He stopped, talked to a family that was guests, told them where the cookies would be sold, but went one better, offering each family member a complimentary treat.

Asked what Melanie sees as Mark’s best qualities, she pauses, takes her time to craft her thoughts and states: “He is a man of integrity, hardworking, says what he does, and is a fantastic father and husband.”

Speaking of hard work, how about baking one-hundred pies, of various flavors for over two-hundred people. It is not an uncommon task to mix, bake, slice and produce brownies for over 2,400 dessert starved individuals! The baking preparation is done on what was once one of the bowling lanes at the YMCA’s Longhouse.

The YMCA of the Rockies seeks to work with many countries, international students arrive from around the world one lucky person will be assigned to the bakery, where Mark will mentor them. He will learn to say “Hello, Good-bye, and Merry Christmas” in their language.

Julie Watkins, President and CEO of the YMCA of the Rockies worked with Mark as they both started their career together. Julie states, “In 1986 I was a seasonal employee living in Hague. (Employee housing.) My roommate, Carol, worked with Mark at the mini-golf course. Handing out golf clubs with Bob Ecker is where the YMCA experience all started for this “surfer dude” from Hawaii. Decades later and after thousands of Mark’s fabulous cookies have been consumed by our guests, he is a great example of being committed to our mission. Thank you, Mark, for your service to the YMCA. I wish you well in your retirement.”

Mike Kingston, Food Service Director has comfortable confidence in working with Mark. “He is the real deal. I don’t usually like getting up in front of a group to talk, but when Mark received his 30-year YMCA service pin, I wanted to present it to him.”

When you ask Mark about his longevity at the Y what was the best part of his years employed, he answers. “Working with people, I just love that. The Y is family.” Mark’s favorite sweet baked good, cinnamon chip muffins, order please!

Robert N. Ruesch is the author of two books about the YMCA of the Rockies (available at Macdonald Book Shop and the General Store at the YMCA) he grew up in Estes Park and how resides in a small hamlet in the foothills, of Colorado called Evergreen where he continues to write articles and is working on another book.