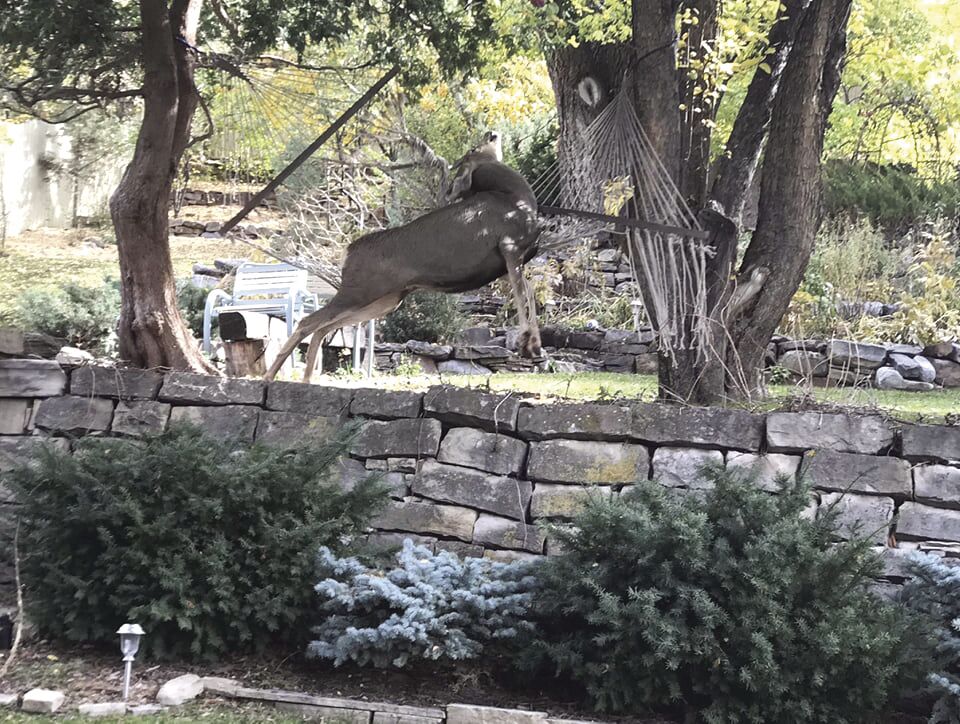 This deer was tangled in a hammock in a backyard in Durango. It was freed unharmed; but Colorado Parks and Wildlife asks everyone to remove tangle hazards from their yards. CPW photo. 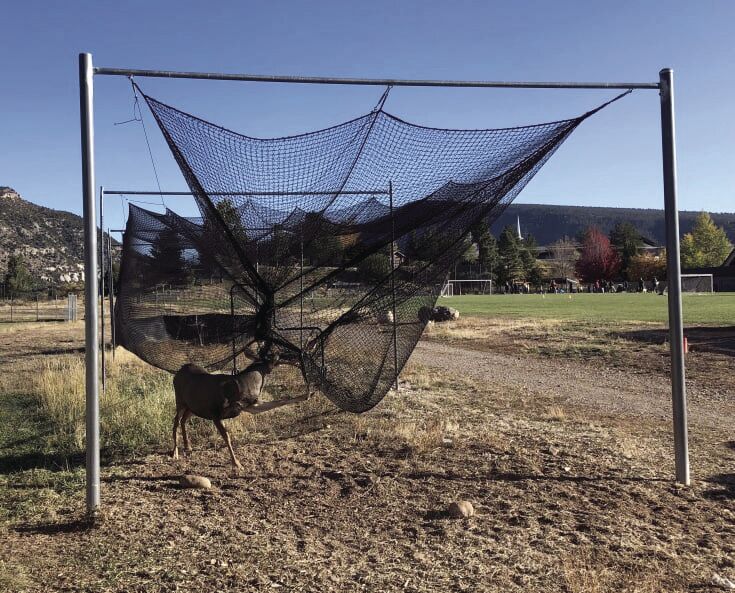 The deer stuck in an athletic net, it also was freed. CPW photo

Deer are on the move at this time of year migrating and looking for mates. But the animals are prone to getting tangled in summer gear left in backyards. Colorado Parks and Wildlife urges everyone to take down volleyball nets, hammocks, hanging lights and other items that deer ─ especially the bucks ─ can get tangled in.

Recently, in Durango and Colorado Springs, wildlife officers have cut nets away from the antlers of buck deer to free the animals. In some cases they’ve had to cut off the animal’s antlers. Over the years, CPW has seen deer and elk tangled with a variety of items, including: tricycles, tires, garden cages, clothes lines, plastic fencing, lawn chairs, Christmas lights and more.

“At this time of year more deer are seen on the roads and they are also in the middle of the rut,” said Matt Thorpe, area wildlife manager in Durango. “People need to take down the things in their yards that snag antlers and slow down as they’re driving.”

As people begin to hang outdoor Christmas ornaments, CPW recommends that lights and other decorations be placed above six feet or attached tightly to trees and buildings. Lights that hang low or that are draped insecurely over vegetation can get tangled easily in antlers.

Wildlife officers can often get deer untangled if they are nearby and are told about it. But every year, CPW gets reports of deer and elk that have died after becoming stuck in fences or in items that prevent them from eating.

Another hazard for deer during the winter is dogs. When they see deer and they are off leash, dogs will follow their natural instincts and give chase. This can exhaust deer or force them into collisions with fences or vehicles. Owners who allow dogs to chase wildlife will be ticketed.

During winter, deer and elk have little to eat and live off the fat stores they’ve gained during the warm months. The animals can lose 20-30 percent of their body weight during the winter. Consequently, they have few calories to spare and they are especially vulnerable in stressful situation.

If you see deer, elk or bighorns at this time of year don’t try to get closer to them in order to take a better picture. They are wary and will burn energy to move away. Observe them from a distance and that will allow them a better chance of making it through the winter.