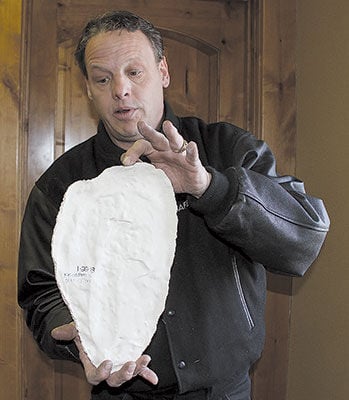 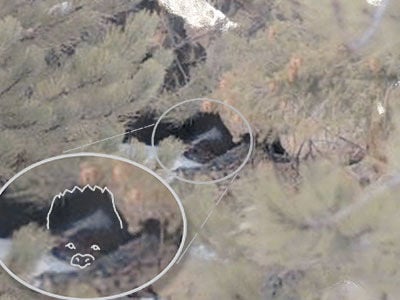 Many of you may remember our story from last February about Ken Collins, local Bigfoot investigator who came to us with evidence of a possible Bigfoot in our area. Ken is back with what he thinks is more proof of this mysterious creature.

Just last week, Ken was walking in the Spirit Mountain area, doing what he loves to do, “Go Squatchin,’” (meaning looking for evidence of a Bigfoot-like creature).

Ken was out searching for evidence when he heard some strange noises ahead of him. He looked towards the sound, pointed his camera and snapped a photo as he tried to figure out what was making the sound. What he saw was a very large, dark colored creature, lying flat on the ground, peering through the trees, looking right back at him. Ken was all alone on this particular venture and he admits, he was a bit frightened. He knew he didn’t want to do the animal any harm and he realized it was much larger than he was so he decided to leave the area.

When Ken got home, he looked at the digital images from his camera and he discovered that he had captured a photo of the creature looking directly at him. If you look very closely at the photos below, you can make out two eyes and a nose or snout, and a very long forhead, just above a tree branch.

Ken went back to the area the next day and while there, he found some very large footprints which he made plaster casts of. The best one is shown here and is 12 inches long. The depth of the footprint is evidence of a very heavy animal.

Once again, Ken has contacted the Bigfoot Research Organization in Colorado Springs. BFRO is the organization which produces the Finding Bigfoot Show. Founded in 1995, the BFRO is now the oldest and largest organization of its kind, a virtual community of scientists, journalists, and specialists from diverse backgrounds. The researchers who compose the BFRO are engaged in projects, including field and laboratory investigations, designed to address various aspects of the bigfoot phenomenon. As a result of the education and experience of its members and the quality of their efforts, the BFRO is widely considered as the most credible and respected investigative network involved in the study of this subject.

Hopefully now, with the help of BFRO Ken can begin to get some answers to his questions. Ken said “I’m just hoping anyone who reads this keeps an open mind and makes their own decisions about what they think is true. I believe there is a Bigfoot creature out there and I hope that I am the one to find it and help prove that this creature is absolutely real.”

Stay tuned, we’ll keep in touch with Ken and follow up on this story as it progresses.